MODERNIST CUISINE: THE ART AND SCIENCE OF COOKING 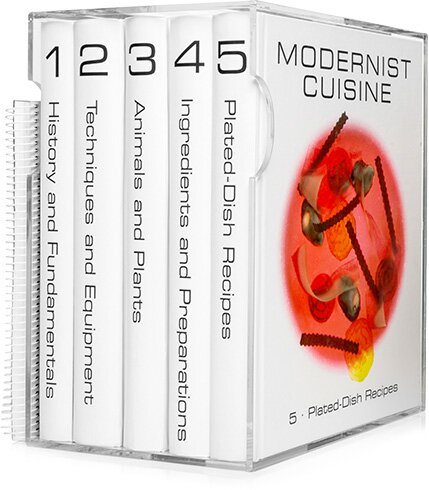 A revolution is underway in the art of cooking

Dedicated to the beauty, passion, and science of cooking, the six volumes of Modernist Cuisine: The Art and Science of Cooking is an accessible 2,438-page encyclopedic cookbook for the professional chef or curious home cook. Armed with the science behind the phenomena of techniques like gelling to the physics of poaching an egg, you will be able to go beyond a recipe and truly innovate in your kitchen.

Modernist Cuisine: The Art and Science of Cooking is a 2011 cookbook by Nathan Myhrvold, Chris Young and Maxime Bilet. The book is an encyclopedia and a guide to the science of contemporary cooking. Its six volumes cover history and fundamentals, techniques and equipment, animals and plants, ingredients and preparation, plated dish recipes and a volume kitchen manual At the Gourmand World Cookbook Awards 2010 the book was named "the most important cookbook of the first ten years of the 21st century" and was introduced into the group's hall of fame.Containing 2,438 pages and weighing in at 23.7 kilograms (52 lb), the book has been described as the “cookbook to end all cookbooks.”

Modernist Cuisine consists of five major volumes plus a spiral-bound kitchen manual, which reprints recipes and reference tables from the major volumes on water-resistant paper for use while cooking.